It’s got History, a Great Lifestyle, Traditions and it’s Contemporary. Discover it in 24 hours 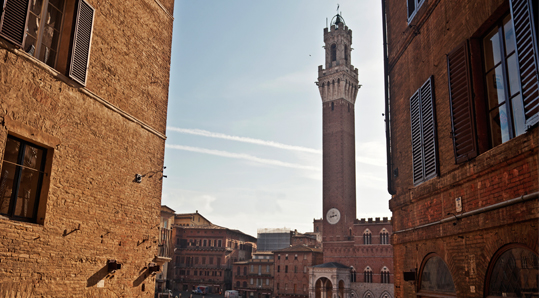 ‘To be honest, kindness lives only in Siena. Everywhere else in Tuscany, civility is just about manners, and not about one’s voice, approach, tone or words.’
(Curzio Malaparte)
This is one of the most famous sayings about Siena and for those who come from Florence, a city deeply entrenched in the unique Tuscan lifestyle, it might seem like an exaggeration, but it only takes a few hours with someone who lives here and knows this splendid city to realize how true it actually is. Surrounded by its ancient walls, the historic center has been a Unesco world heritage site since 1995 and well known for the medieval Palio, the horse race that pits the 17 neighborhoods against each other. In 1200 it was a rich republic based on commerce and very proud of its palaces and churches, and the way it was able to encourage and inspire important artists. During its war with Florence, Siena Ghibellina had significant victories at Monteaperti (1260) against the Florentine Guelfs, which the Sienese still recall today. Then came the city’s decline and it was taken over by its old enemies. Its traditions are still alive today: the aforementioned Palio race, or carriera, takes place twice a year (July 2 is the Palio di Provenzano, in honor of the Madonna di Provenzano and August 16 is the Palio dell’Assunta). In all honesty, the two races represent the apex of a religiosity that is celebrated by a tradition that Sienese people have engaged in since the city’s origins: each neighborhood has its own headquarters, museum and personal church.The city is also often used as a location for major films and each year, at the end of September, there’s the Terre di Siena Film Festival, a competition that was organized by Maria Pia Corbelli, who brings actors like Susan Sarandon and Robert Redford to the city. Here is a 24 hour itinerary.

10am
Leave your car in one of the lots that surrounds the city. For the past fifty years, the lastre (or smooth stones that the roads are made of) are only viable by foot. We parked at Fontebranda parking lot and walked into the city, admiring its walls. The splendid San Domenico Church is immediately on your left. Take the steep road (or pettata, as it is called in Siena) up and you will find yourself in Piazza del Campo, with its unique shell shape with nine corners, as much the center of life today as it was in 1300. Admire the Torre del Mangia and enjoy one of the best views from its 88-meter tall tower. Admire Fonte Gaia, one of the most beautiful fountains, and a copy of the one originally sculpted by Jacopo della Quercia between 1409 and 1419. This is the piazza where the Palio is run. Now take City road: stop to admire Palazzo Chigi-Saracini, a splendid example of medieval architecture that hosts the Accademia Musicale Chigiana. Stop at the Antica Drogheria Manganelli to buy some coffee, pepper or chocolate or at the Antica Pizzicheria de Piccoli for panforte. Continuing on, you will reach the Duomo: starting this spring and until August you will be able to admire many masterpieces including the Battesimo di Cristo by Titian, on loan from the Pinacoteca Capitolina in Rome and which will be shown in the crypt beneath the Church. The Museum dell’Opera del Duomo holds the most important Sienese artworks, including Duccio di Buoninsegna. Santa Maria della Scala is hosting a solo show of cartoonist Milo Manara’s works until mid-April. To get the best views of the city, climb up to the top of the unfinished façade of the Duomo. During its construction the city was struck by the plague; one hundred years later they decided to start over entirely and to turn it around by 90 degrees, where it now is.

4pm
The afternoon is dedicated to shopping: the city is small but the number of boutiques makes up for its size. Take a long walk along the Corso. Cortecci, with its two clothing and accessory stores on Banchi di Sopra and in Piazza del Campo, has been around since 1935; there you can find clothing by Gucci, Dior, Lanvin, Roberto Cavalli, Ermanno Scervino or Balenciaga (www.corteccisiena.it).
Franchi is another famous shop. The store on Via del Corso has recently been remodeled: you can find bags and accessories by Borbonese, La Martina, Liebeskind Berlin as well as lots of women’s clothing (www.franchifashion.com). Visit the concept store, Mag, on Via dei Termini: originally a knitwear shop, today it offers clothes by Chloé and Marni and fragrances by Diptyque as well as other creations by young designers.(www.magboutique.it). Those who follow trends must go to Dolci Trame: Stella Jean, Gianluca Capannolo, Isabel Marant are among some of the new designers hosted this spring, and their clothes hang alongside those of affirmed designers like Dries Van Noten or Alexander Wang with accessories by Delfina Delettrez and Golden Goose (also for sale online at www.dolcitrameshop.com). If you like vintage clothing, stop at Aloe&Wolf on via del Porrione and then go see Brocchi, the studio where you can watch sculptors at work. Then walk to piazza Salimbeni, the headquarters of the oldest bank in the world, Monte dei Paschi.

7pm
Go to Piazza del Campo and sip a glass of wine or a spritz at Liberamente Osteria or Bar Il Palio.
9pm
There are numerous specialties from the area, including Sienese cinta pork, an autochthonous breed of pig which dates back to the Etruscan period and which now has Dop European status (together with olive oil and panforte). Some of the best restaurants include: Osteria Le Logge, which is one of the oldest. Opened by Gianni Brunelli in 1977, it is managed today by Laura with the help of her friend and partner, Mirko. You will probably see a famous actor or director there. (www.giannibrunelli.it).In September the same owners will open up a private club dedicated to art installations, live concerts and cocktails in a splendid underground location. Another great place that you shouldn’t miss is Enoteca I Terzi: let Michele spoil you with their homemade pasta, Chianina beef, meats braised with Chianti and fabulous desserts,(www.enotecaiterzi.it). There is also Taverna di San Giuseppe or l’Osteria Il Boccon del Prete. Leaving the center of town, but still in Siena, there’s also Il Canto, the restaurant at the Certosa di Maggiano (www.certosadimaggiano.com) where chef Paolo Lopriore runs the kitchen.

11pm
The best hotels in Siena include the already mentioned Certosa di Maggiano or the Grand Hotel Continental, a 5 star hotel in the heart of the city (www.grandhotelcontinental.it)