Terraces with a wiev

A travel around a geometric and severe city 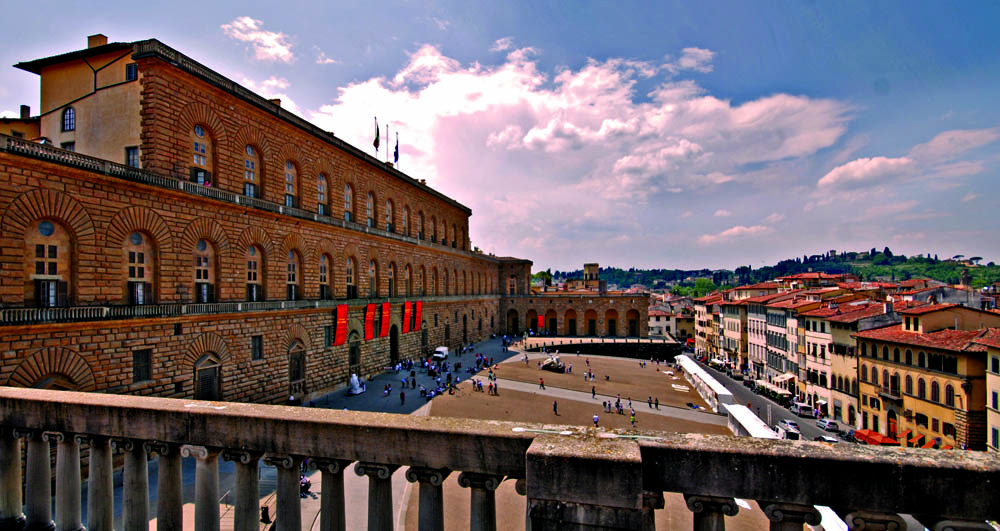 Marcel Proust was right when he said that ‘true discovery is not a matter of finding new territories but about seeing them with new eyes’. That’s just what we’ve done—taking our gaze and objectives out onto the most beautiful terraces of Florence, to reveal a city that’s geometric and severe, even more exact than Modrian would have been able to image. And if that champion Vasari knew how to share his know-how about geometry in the 1400s, generations of architects, bricklayers and stone cutters knew how to execute it. From up above, the order inherent in the city’s lines catches the curious eye, especially when you come upon the three ‘pieces’ that represent the Italian Renaissance’s manifesto: the Baptistery, the Duomo and San Miniato. These three marvels in white and green marble are well-visible from the magnificent terraces of Palazzo Gianfigliazzi, site of the exclusive ‘Antica Torre Tornabuoni’ hote The ‘lagoon effect’ repeats itself other places as well, like on the terrace of Villa Bardini, where the tree tops’ foliage plays hide and seek with the Lungarni, mystifying the setting.
If we distance our gaze, our new perspective is drawn to the city itself, melancholy and mute—where silence is simply history. Its faithful story is told through pietra serena, cerulean on the palaces’ high gothic facades whose color is almost always a faded yellow. The brightest buildings are plastered white. There are no balconies; you’ll find, instead, a long series of closed windows boasting bark-colored shutters. The gaze never tires. It moves upward amidst the foliage of ultra-high holm oaks and discovers the bridges of Florence as they stretch like arches; the Piazza dei Giudici appears no larger than a cement handkerchief. Once you raise your head to overlook the city’s red rooftops, you’ll find cupolas and towers: San Lorenzo, Santa Croce, the Duomo, the Synagogue, a bright pistachio green.
Florence has carried a sense of abstract elegance with her for centuries, without the dissonance of urban traffic, that always proves misleading. Think with pleasure to the ripples of authentic life that Sant’Ambrogio still manages to express with its market, brimming with first fruits and clothes stands; workshops surrounding it. The excitement grows as you arrive at the Palatina Terrace on the left side of Palazzo Pitti. This lovely 600-meter space is off-limits on most days as the privileged terrace is only open to public in exceptional cases. And then, there’s Via Giucciardini. And who would have thought it? Palaces surrounded by buzzing traffic know how to stand with Arab-like mystery, hiding the magnificent luxury of their terraces in private back portions, whose expanse overlooks the Boboli Garden. These unseen hanging gardens are simply magnificent.
Without the help of the kind official escorting us, we would never have known that beneath the entrance to the Rondò di Bacco, overlooking an internal courtyard, you’ll find the Carabinieri residences, where the old-time stables began; today they are used as a storehouse. Going clockwise from Bellosguardo to the Boboli, you’ll see the Della Specola Museum, catching a glimpse of Piazza San Felice. As your gaze moves along the Duomo and Santa Croce, it will reach the tower of the Church of Santa Felicita. The last stop is the Grotto of Buontalenti, a mystical place when seen from above—almost exotic. Another mystery lies in the workings of the clock on Palazzo Vecchio; it marks the time, with a single clock hand. From the terrace of the Uffizi, you can touch history with your fingertips, as you understand that a quarter of an hour during the times of Arnolfo had relative meaning. From up there, you’ll feel like you can hear the clinking of cups served at Revoir, historic café par excellence. But it’s even more impressive to see just how many tourists court the famous Biancone. As you catch a glimpse of the terrace near the Cassa di Risparmio’s attic, you ask yourself what ever happened to the Alberto Della Ragione Collection; once it got placed up there, it seems to have sunk into mysterious oblivion. The terrace of the suite ‘Luisa Via Roma’ also offers another interesting point of view. From its privileged position, you can all but caress the Duomo’s cupola—Florence’s ‘holy mountain’. In truth, one can see it from all of Florence’s terraces, either near and far. Next, there’s the transparent roof of the San Lorenzo market, the beautiful industrial architectural structure by engineer Giuseppe Mengoni. Meanwhile, on the open gallery of the Palazzo Arcivescovile, there’s a pair of bells that no longer ring.
Once you push past the historical center, you’ll want to turn your gaze westward. From the terrace of the ‘Westin Excelsior’ that’s easy. After being closed for 25 years, this terrace can be enjoyed starting this autumn thanks to the renovation of its lounge bar. No moment escapes you, yet, this time, the scene’s protagonists are bridges—from the ‘Carraia’ to the ‘Indiano’, following the fascinating weir that winds along the river. One final surprise is granted by the terrace of the ‘Minerva’ overlooking Piazza Santa Maria Novella. This hotel is welcoming its last finishing touches after a long restoration project. Hidden amidst the city’s palaces, you’ll also discover the cloisters of the Caribineri military police school, which you can reach through Via della Scala. The sun reflects on the skylight that Michelucci set up on the rooftop of his ‘Station’, an indisputable architectural icon.