The tranquil charm of Versilia 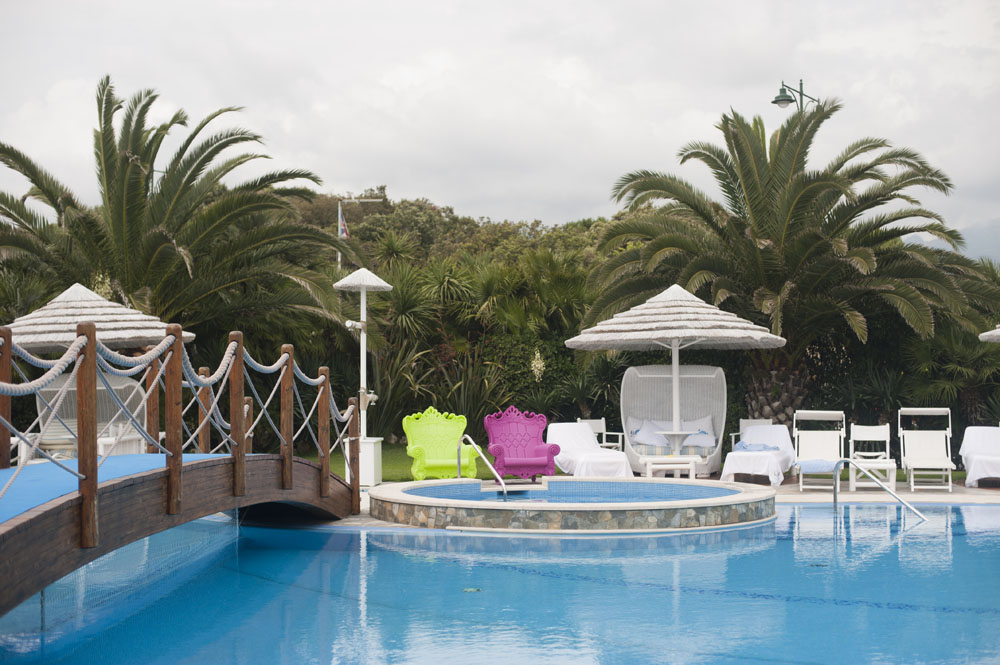 ‘I am divine; and you maybe, I like. Unlike the hairy dread Satyr upon the myrtle bed or faun who chases after me. You maybe I like. Your skin the blazing sun has darkened gives off a salt sea-water. Your legs are as smooth as polished bronze and slim.’ Versilia, Halcyon, Gabriele d’Annunzio.
It was the 1920s and the first lidos were beginning to appear along the strip of coastline in northwestern Tuscany, marked by small piers which went from the sand and stretched the first few metres into the sea. And so Versilia, which was to become one of the most popular destinations for the long Italian summers, found its tourist vocation. Families from Tuscan and Milanese high society along with members of the international jet set ratified its success, which reached a peak in the legendary events of the 1960s when the splendid Mina would dominate the stage at Bussola, and the beat of Little Tony and Edoardo Vianello’s twist and rock ‘n’ roll at La Capannina di Franceschi made the nights fly by. And now? Versilia (which, to be precise, refers to the stretch of coastline from Stazzema as far as Marina di Massa, taking in the four municipalities of ‘Versilia storica’, namely Pietrasanta, Forte dei Marmi, Seravezza and Stazzema, plus the various villages that the Tyrhennian coast is divided into) is still one of the most interesting locations for tourists, both from Italy and – in particular in recent years – from abroad. We’ve selected a brief itinerary for you so you can enjoy a custom-made 24 hours.

10 am
Forte dei Marmi. The day starts off slowly, savouring a tasty coffee outdoors at the bar Il Giardino in the famous little piazza in the centre. Before you go to the beach, make the most of being here to do some shopping in the undisputed kingdom of fashion: from Gucci to Ermanno Scervino, from Save the Queen to the brand-new Escada, from the six Fiacchini stores with men’s and women’s fashion labels, to smaller shops, which mustn’t be missed all the same, like Ali Babà the jeweller’s, Antonio L’Artigiano, whose tailor-made boots are a real must-have, or Babol, the cool, brightly coloured store for younger women. The Wednesday morning market in Piazza Marconi is a real institution during the Versilian summers, with endless great bargains for designer clothes and accessories at the lowest of prices. Stop off to buy some schiacciatine from Valè, in the square, or if you prefer something a bit more upmarket I parmigiani offers a fine selection of cured meats, cheese, homemade pasta and the best local products. And then it’s time to sunbathe in one of the many fantastic bathing establishments along the coast: two that you can’t miss out on are Bagno Annetta (ask for the owner, Carmela) and Bagno Pennone.

6 pm
After a long day by the sea, stop off for an aperitif at Caffé Morin or Almarosa, two historic venues for Versilia’s regulars. Then you can move onto the sea front towards Viareggio, Bagno Texas, or onto the pier at Lido di Camaiore. Get to Viareggio and take a walk along the famous promenade, dotted with shops, and you’ll come to one of the interesting exhibitions put on by GAMC – the modern and contemporary art gallery in Piazza Mazzini. An excellent alternative for the early evening is to go to Pietrasanta, a small gem of a town. Boasting international status in the marble sector, above all in recent years it’s become an important reference for sculptors and artists from all over the world. The seasonal shows organised in Piazza del Duomo and the church of Sant’Agostino, as well as in the many contemporary art galleries, are very interesting. For a touch of shopping stop off at Zoe, a boutique offering clothing and women’s accessories from the top fashion houses. Have a spritz in one of the ever-bustling venues in Piazza del Duomo, while you wait for the time to come to go to dinner: the rule is never before 10 o’clock.

10 pm
If you’ve decided to stop in Pietrasanta, the top places to go are: Enoteca Marcucci (Via Garibaldi 40), renowned for its wine list with over 2,500 labels, Ristorante Pinocchio (Vicolo San Biagio 5), opened just last year and already one of the town’s places to be, Filippo (Via Stagi 22), with a cosy atmosphere and traditional dishes given a modern touch. Or Il lunedì dello studio: ‘hidden’ in a small alleyway off Piazza Matteotti, it’s a unique venue with its elegant and at the same time cosy ambience as well as excellent cuisine. Or are you heading back towards Forte dei Marmi? Stop off at Lorenzo (Via Carducci 61), an authentic institution for the town’s gourmet lovers for over 30 years. At the restaurant in Hotel Byron (Viale Morin 46) or Fratellini’s (Viale Franceschi 2A), a Miami-style venue offering excellent fish dishes. In Viareggio, at the Michelin-starred restaurant in Grand Hotel Principe di Piemonte (Piazza Puccini), at Romano (Via Mazzini 122), one of the cult restaurants, at Da Pino in Via Matteotti or at the restaurant-wine bar Henri in Via Fratti 316.

1 am
After sipping a cocktail in company in one of the many bars in the area, the time has come to go to dance in one of the nightclubs that have made history in Versilia. Of all of them, La Capannina. Established in 1929 by the entrepreneur Achille Franceschi, the story goes that it was right here, at the end of the 1930s, that they invented the Negroni cocktail: myth has it that Count Camillo Negroni had them add gin to the already famous American cocktail. Reaching its heyday in the 1960s, La Capannina is still one of the most chic venues in the whole of Versilia. It’s impossible not to give a mention to Twiga Club in Marina di Pietrasanta: created by Flavio Briatore, it’s the perfect place to relax in the afternoon under its canopies on the beach, have an aperitif at the Sunset Beach Bar, and go to the restaurant and nightclub. Another of the riviera’s legendary nightclubs is Seven Apples, which has been part of the nightlife for thirty years.
The 1950s was the golden moment for Bussola: this is where names such as Juliette Greco and Patty Pravo were launched, and you could easily come across artists such as Ella Fitzgerald or Marlene Dietrich. And before you go to bed, stop off for a brioche and cappuccino at Anacleto, where young Versilian night owls say their goodnights as daylight appears.

The most exclusive beach club of Forte dei Marmi

The most exclusive beach resorts to discover “Forte”